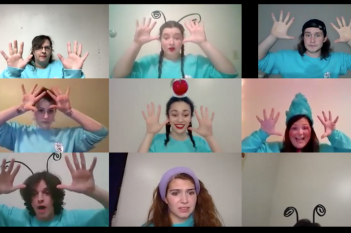 Michigan State University’s Department of Theatre has produced a new sensory-friendly musical for children who are neurodiverse and will begin offering free virtual performances this month.

Written by students and faculty at Michigan State University, Soda Pop Shop! is an interactive musical that ​invites audience members to relate to the experiences of the characters in the show and help them cope with their feelings as they celebrate the grand opening of Brother and Sister’s Soda Pop Shop!

In response to the COVID-19 pandemic, the cast and creative team of Soda Pop Shop​! have worked to turn the musical into a live, virtual, and interactive performance where the cast will sing, dance, and act on Zoom for families with children who are neurodiverse. Performances will be scheduled throughout the spring semester of 2021, beginning in February and continuing until the end of April. Dates and times for spring semester performances will be released at a later date.

Recent theatre trends have created an increasingly inclusive auditorium by taking existing musicals and plays and altering them to be more sensory-friendly for audiences who are neurodiverse. This often includes reduced sounds, decreased lighting intensity, an opportunity to learn about the show ahead of time, and a flexible box office. Rather than altering an existing play, Michigan State University Theatre students and Children’s Theatre Specialist Dionne O’Dell saw an opportunity to take this trend one step further by writing a show specifically for children who are neurodiverse.

“People often say ‘let kids be kids,’” said Emily Herman, junior Theatre major who portrays Cotton Candy in the musical. “Creating sensory friendly theatre offers children who are neurodiverse, who may otherwise not have highly accessible art forms, the freedom to express themselves and grow in an artistic environment.”

Drawing from 1950s diner inspiration, the musical invites the audience to enjoy the grand opening celebration of Brother and Sister’s Soda Pop Shop! as Cotton Candy, Cherry, Lightning Bug, Lavender, and many other characters sing, dance, and play games. The show is highly engaging for the children in the audience through the use of lollipop drums, lavender smell salts, build-your-own ice cream sundaes, interactive games, and so much more.

The main character, Jitterbug, begins the show by feeling very overwhelmed by the excitement, energy, and amount of people in the room for the grand opening. The show follows Jitterbug as he finds and explores new ways to feel calm after being overwhelmed by the big celebration. Writers of the show offer a space for children in the audience to connect with this experience and possibly learn from Jitterbug’s journey.

The connections forged between actors and audiences become deeply personal as we work together to build the fantastical world our show lives in and relate our character experience to those we are performing to.

“The connections forged between actors and audiences become deeply personal as we work together to build the fantastical world our show lives in and relate our character experience to those we are performing to,” said Kevin Mazur, junior Theatre major who plays Jitterbug in the show.

Performances will be intimate with only six children attending each Zoom performance in order to create a connection between the actors and the audience. Families wishing to reserve a performance should express their interest and availability by emailing Soda Pop Shop! outreach coordinator, Sam Carter, at carte392@msu.edu.

Soda Pop Shop! ​is presented by Michigan State University’s Department of Theatre, which believes that “Theatre is best when it incites ​or excites. Plays and musicals provoke action. Challenge complacency. Demand your attention. Productions from various eras and genres examine what makes someone rebel or challenge the established way things have always been done.”

An earlier version of this story did not use person-first language. The story has been edited to correct this error.

Present your research on issues of diversity and advancing inclusion at the MSU Union!

Sponsored by the NIH National Heart, Lung, and Blood Institute, BRUSHS provides hands-on research exposure and graduate school preparation opportunities for individuals who are from diverse backgrounds that are underrepresented in biomedical research. 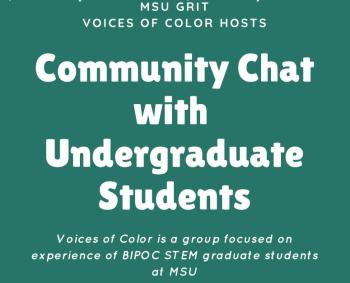 Our Ambassador are waiting and ready to help you achieve your undergraduate research goals.